Hashitoxicosis, three cases and a review of the literature

20.2.15
In young hyperthyroid patients, Graves’ disease is the most likely explanation for the patient’s symptoms; however, there are other reasons that have to be considered. A hyperthyroid metabolic state can also be caused by thyroid cell inflammation and destruction. Hashitoxicosis – Three cases and a review of the literature Igor A Harsch, Eckhart G Hahn, Deike Strobel As thyroid cells die, their stored supplies of thyroid hormone are released into the blood circulation. These bursts of thyroid hormones are responsible for the symptoms of hyperthyroidism. This ‘leakage’ phenomenon has nothing to do with the stimulation of the thyroidstimulating hormone (TSH)-receptor typical of Graves’ disease. It can occur in post-partum thyroiditis, ‘silent thyroiditis’, thyroiditis de Quervain and the initial ‘active’ state of Hashimoto’s thyroiditis. Hashimoto’s thyroiditis Hashimoto’s thyroiditis is an autoimmune disease first described by Hakaru Hashimoto in 1912. Antibodies against thyroid pe
Een reactie posten
Meer lezen 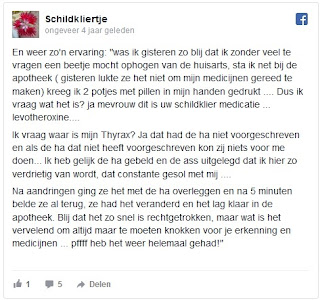 1.2.15
Bron: Thyroid. December 2014, 24(12): 1670-1751. doi:10.1089/thy.2014.0028 A number of recent advances in our understanding of thyroid physiology may shed light on why some patients feel unwell while taking levothyroxine monotherapy. The purpose of this task force was to review the goals of levothyroxine therapy, the optimal prescription of conventional levothyroxine therapy, the sources of dissatisfaction with levothyroxine therapy, the evidence on treatment alternatives, and the relevant knowledge gaps. We wished to determine whether there are sufficient new data generated by well-designed studies to provide reason to pursue such therapies and change the current standard of care. This document is intended to inform clinical decision-making on thyroid hormone replacement therapy; it is not a replacement for individualized clinical judgment. Guidelines for the Treatment of Hypothyroidism: Prepared by the American Thyroid Association Task Force on Thyroid Hormone Replacement Jacqueli
Een reactie posten
Meer lezen
Meer posts