11.3.21
Oral levothyroxine sodium is absorbed in the small intestine, mainly in the jejunum and the ileum being lower the absorption rate at duodenal level. The time interval between the ingestion of oral thyroxine and its appearance in the plasma renders unlike a gastric absorption of the hormone.

Levothyroxine therapy in gastric malabsorptive disorders
Camilla Virili, Nunzia Brusca, Silvia Capriello, Marco Centanni
New formulations of levothyroxine in the treatment of hypothyroidism: Trick or Treat?
Endre V. Nagy, Petros Perros, Enrico Papini, Monika Katko, Laszlo Hegedüs
However, several evidence confirm the key role of the stomach as a prerequisite for an efficient absorption of oral levothyroxine. In the stomach, in fact, occur key steps leading to the dissolution of thyroxine from the solid form, the process bringing the active ingredient from the pharmaceutical preparation to the aqueous solution.

In particular, gastric juice pH, volume, viscosity, as well as gastric emptying time seem to be the most important limiting factors. These hypotheses are confirmed by the detection of an increased need for levothyroxine in patients with Helicobacter pylori infection, chronic atrophic gastritis, gastroparesis, or in simultaneous treatment with drugs interfering with gastric acidic output.

The aim of the present article is to focus on the knowledge of pathophysiologic events that determine the absorptive fate of traditional (tablet) and alternative thyroxine preparations (softgel capsule and liquid solution) in patients bearing gastric disorders.

Levothyroxine sodium monotherapy is usually prescribed as treatment in replacement mode for hypothyroid patients worldwide. The need for an individually tailored dose has been strongly suggested. However, a significant number of patients fail to show a biochemical and/or clinical response and larger doses of thyroxine are required to reach the target serum TSH concentrations. Long-term suboptimal treatments have detrimental effects on body homeostasis. Frequent changes of dose and repeated diagnostic procedures in these patients have been related to incremental health costs.
The causes of an increased thyroxine requirement have been recently reviewed. Among these, the role of the altered gastric physiology on the subsequent intestinal T4 absorption has been repeatedly highlighted. The mechanism by which intestinal absorption of thyroxine is impaired in patients with gastric disorders is unclear but seems to pertain to the chemical and physical properties of both naïve and salificated thyroxine molecule.
Levothyroxine, the levo-isomer of thyroxine, is insoluble in water and in other usual organic solvents. The salification process by a saturating excess of sodium hydroxide leads to the sodium salt production that is the compound used in every pharmaceutical preparation of thyroxine. The oral is the preferred route of administration, due to safety and patients’ preference.
Oral levothyroxine absorption is incomplete with reported percentages of about 70% of the administered dose. The actual site of absorption is represented by the jejuno-ileal tract while only a few part of oral thyroxine is absorbed in the duodenum.
Unlike the rat, no absorption in the large bowel has been described in humans. Furthermore, the study of the lag time between thyroxine ingestion and its appearance in the plasma excludes the possibility of absorption occurring in the stomach. However, several clinical studies suggested that the variations of gastric physiology might have a deep impact on oral thyroxine bioavailability, leading to an increased need for the drug. We aimed at reviewing the known and unknown on the role of the gastric environment in the absorption of oral thyroxine. 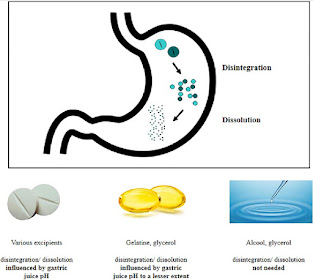