The starting dose of CBZ/MMI is usually between 20 to 40 mg/day depending on the severity of the hyperthyroidism. PTU is started at between 100 to 150 mg 3 times a day with 100 mg of PTU considered equal to about 10 mg of CBZ/MMI. The initial high dose of the drugs can be tapered down after 4 to 8 weeks in what is referred to as the titration regimen. A maintenance dose of 5 to 20 mg of MMI or equivalent is achieved by about 4 to 6 months and this is continued for 12 to 18 months. The block–replace regimen refers to the option of maintaining the high dose of antithyroid drugs while adding levothyroxine to maintain euthyroidism. This has the advantage of fewer thyroid function tests (TFTs) but there is some evidence of a higher frequency of side effects. About 12 trials (Table 1) have examined these regimens. The relapse rates are similar at over 55% but the withdrawal due to side effects (16% versus 9%) and complication rates including rashes and agranulocytosis were higher in the block–replace regimen. One trial that used CBZ 100 mg daily led to 7 out of 17 (46%) withdrawing from the high dose arm due to side effects and 2 cases (12%) had agranulocytosis, a potentially fatal complication.

Radioiodine may be given using fixed high doses or by calculated doses following uptake studies. The risks of radioiodine including eye disease and the role of prophylactic steroid therapy are discussed. The commonly used antithyroid drugs include carbimazole, methimazole and propylthiouracil; however a number of other agents have been tried in special situations or in combination with these drugs. The antithyroid drugs may be given in high (using additional levothyroxine in a block–replace regimen) or low doses (in a titration regimen).

This review examines the current evidence and relative benefits for these options as well as looking at emerging therapies including immunomodulatory treatments such as rituximab which have come into early clinical trials. The use of antithyroid therapies in special situations is also discussed as well as clinical practice issues which may influence the choices.

Many of the symptoms of hyperthyroidism such as sweating, anxiety, tremor and palpitations are caused by increased sympathetic activity and can be controlled rapidly by beta-blockers. Propranolol in relatively high doses of over 160 mg per day can mildly inhibit conversion of T4 to T3. Once daily betablockers such as atenolol 50 to 100 mg or nadolol 40 to 80 mg can be used to improve compliance. In the absence of contraindications such as asthma, betablockers are used in the first few weeks of treating hyperthyroidism while awaiting the effect of antithyroid medications. They may also be used when antithyroid medications are withdrawn for treating with RAI. Rate-limiting calcium channel blockers may be used if there are contraindications for betablockers.

These are rarely used for the rapid control of hyperthyroidism in the context of thyroid storm or in the preoperative preparation for thyroid surgery. Iodide decreases thyroid hormone synthesis by blocking iodide oxidation and organification – the Wolff–Chaikoff effect. It also inhibits thyroglobulin proteolysis and release of T4 and T3. The effect is rapid and pronounced but lasts for only a few weeks with a potential for subsequent deterioration. Iodide decreases the vascularity of the thyroid but in one controlled study had no significant influence on blood loss or perioperative course. It can be given as Lugol’s solution (8 mg of saturated iodide per drop) 3 to 5 drops 3 times a day or as a saturated solution of potassium iodide (SSKI, 50 ng of iodide per drop) 1 drop 3 times a day. Oral cholecystographic agents (sodium iopanoate and sodium ipodate) have also been used for rapidly lowering thyroid hormone levels in combination with MMI74 and may be useful in thyroid storm.

Lithium has a role in inhibiting thyroid hormone synthesis and release. Lithium can rarely be used in patients intolerant of thionamides. It has been shown to reduce the thyroid hormone increase after thionamide withdrawal and RAI therapy in Graves’ disease.

This is a competitive inhibitor of iodide transport but is rarely used due to its side effects, particularly the risk of aplastic anemia with long-term use. It may be used in the context of amiodarone-induced thyrotoxicosis or while awaiting RAI in patients allergic to thionamides.

Graves’ disease is an autoimmune B-cell mediated condition in which TSH receptor antibodies (TRAb) play an important role in the pathogenesis. A few agents are being investigated but the only agent that has entered phase II clinical studies is rituximab (RTX). This is an anti-CD20 monoclonal antibody which causes B cell depletion in the circulation as well as in target organs such as the thyroid. Due to the limited experience and costs further studies are needed before these agents are considered as possible therapies in GH. 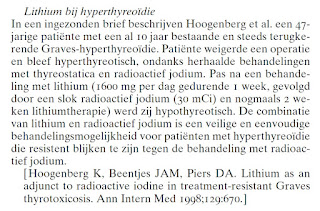