11.2.16
Foetal programming is an emerging concept that links a wide range of exposures during foetal life to later development of disease. Thyroid disorders are common in women of reproductive age, and careful management of pregnant women suffering from thyroid disease is important considering the crucial role of thyroid hormones during early brain development.

It is possible that maternal thyroid dysfunction in pregnancy may lead to structural and/or functional changes during foetal brain development. Such an effect could later predispose the offspring to an increased risk of neurologic or psychiatric disease. We recently observed that children born to mothers with thyroid dysfunction had an increased risk of developing seizure disorders, autism spectrum disorders, attention-deficit hyperactivity disorders and psychiatric disease in adolescence and young adulthood. In the review, we discuss the concept of potential foetal programming by maternal thyroid disease.

Thyroid hormones are essential developmental factors. In 1912, Gudernatsch showed that the feeding of tadpoles with small pieces of the thyroid gland triggered the transition into frogs. This finding suggested that amphibian metamorphosis (postembryonic transition) was controlled by a substance from the thyroid gland. 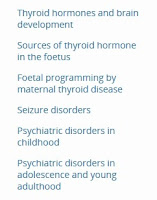 We recently observed that children born to mothers with thyroid dysfunction had an increased risk of neurologic and psychiatric diseases later in life. Thus, it can be speculated whether maternal thyroid dysfunction during a pregnancy may affect foetal brain development in a way that programs the foetus to later development of disease. Neurodevelopmental disorders are disorders of brain function caused by impaired development of the brain. The group includes specific defects such as impairments in language, vision and hearing, and a neurodevelopmental origin has also been proposed for a number of neurobehavioural disorders including seizure disorders, autism spectrum disorders (ASD), attention-deficit hyperactivity disorder (ADHD), psychotic disorders and anxiety disorders.

In this review, we discuss the concept of foetal programming in relation to maternal thyroid disease focusing on the role of thyroid hormones in early brain development and the risk of various neurobehavioural disorders in the offspring later in life. There may be important associations between maternal thyroid dysfunction and neurocognitive outcomes including child IQ. However, this is not the topic of this review.

Thyroid hormones are crucial regulators of early brain development. Maternal thyroid dysfunction in pregnancy may program the foetus to later development of disease via structural and/or functional changes during early brain development. Further studies are needed to expand the hypothesis of foetal programming by maternal thyroid disease. For the spectrum of neurobehavioural disorders in the offspring, all studies have been observational in design and prospective intervention studies are needed similar to the ongoing studies on neurocognitive outcomes.