Treatment adherence was studied in 97 children treated orally with thyroxin. TA was calculated based on the prescription refill rates.

Puberty and self-administration of drugs were negative predictors of TA. Therefore, in puberty, prevention and treatment efforts should be undertaken to improve TA, especially when adolescents administer their drugs themselves. 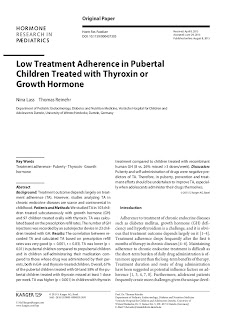